Home » Android » How To Fix “Can’t Take A Screenshot Due To Security Policy?” 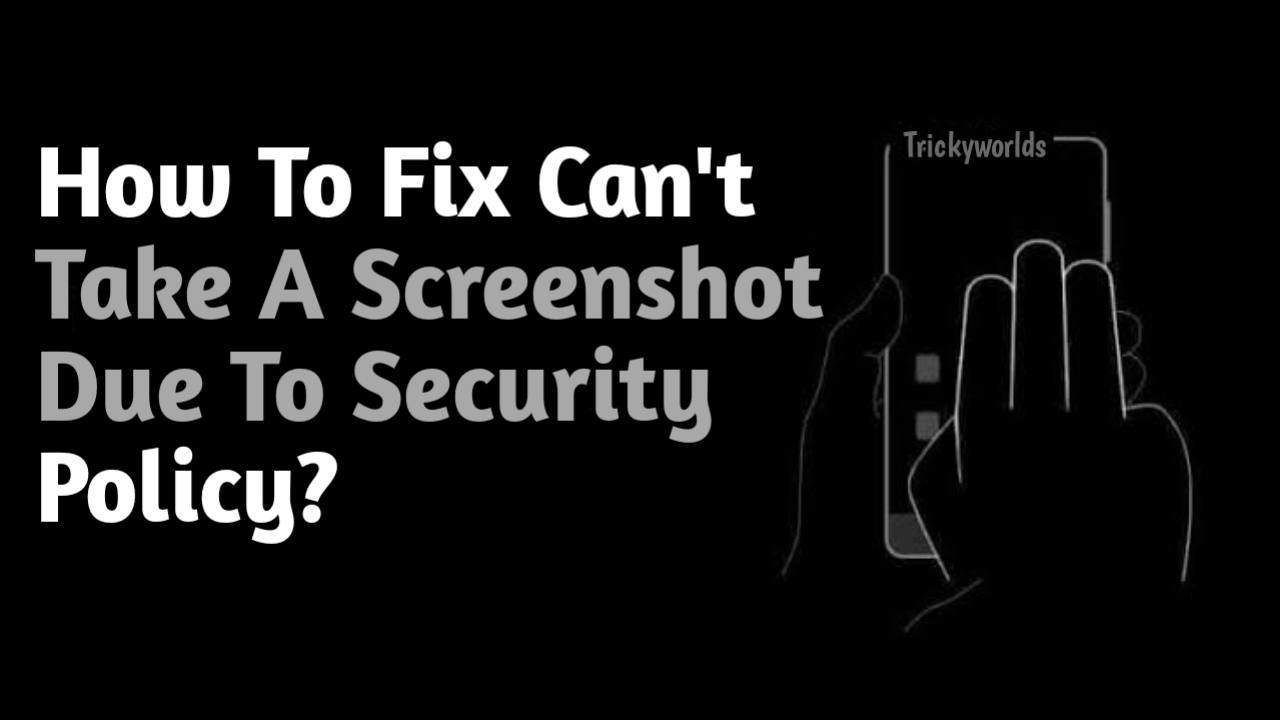 Seeing the “Can’t Take Screenshot Due to Security Policy” message pop up when you try to take a screenshot of your Android screen can be frustrating? when you have found some important knowledge online and you want to share it with someone and a screenshot may be the best way to do just that.

So if you want to know how to avoid the “Can’t Take A Screenshot Due To Security Policy?” message, then this article is for you. In This Article, I Have Shared The Easiest and Working Methods Which Helps You To Solve This Error. So Read This Article Till The End.

Some apps, such as Netflix, Facebook, Webtoons, banking apps, and more, do not allow you to take screenshots when the app displays copyrighted material (such as Netflix shows) or just to protect the privacy of users such as Facebook or Accounts.

Other apps like Chrome also disable the screenshot feature in incognito tabs (except Chrome Canary which is explained below). Regardless of the phone, whether it is a Samsung S8, Samsung S10, or Samsung S9, sometimes taking a screenshot is not allowed in some situations.

Some smartphones also show different messages, such as “This app does not allow taking screenshots”, which also means the same thing. You are not allowed to take any screenshots, even if you can, which may break the security policy the app is trying to enforce.

Reasons For “Can’t Take Screenshot Due to Security Policy” Message

How To Fix Can’t Take Screenshot Due To Security Policy Error?

You must have seen many reasons why screenshots may not work on some applications. It is not easy to fix this problem. However, Trickyworlds offers some great solutions. After deciding on this issue, pick up these tips and tricks. This can help when you can’t take screenshots due to security policy.

Google Chrome’s Incognito Mode is designed to provide a private and safe browsing platform. It is used when a user does not want to save their search history or search results. A feature of this mode is that the option to take screenshots is disabled automatically, due to the high security.

To be able to capture screenshots in Incognito mode, you’ll need to go to the Chrome “flags menu.” This is where Chrome’s experimental features stay. To enable screenshots follow the below steps:

1. First of all open your chrome browser.

2. Then enter “chrome://flags” into the search bar.

4. Click on the pull-down menu below it, then select “Enabled.”

5. For these settings to take change, click on “Relaunch” at the bottom of the right corner.

An organization or a phone company may have put a screenshot-taking restriction. Also, there might be some apps that use to save private data. They might use them to maintain banking, and personal data, save bank details, medical records, etc. Because of the high level of protection needed for and given by these apps, the screenshot-taking feature might be disabled.

If you have recently installed an app that may be causing a problem due to coding to regulate or restrict features of your phone, such as something related to work or designed to control or restrict your phone Uninstall it and see if you are able to take a screenshot.

If you have a company or Institute account linked to your phone, your company or institute may have a “no screenshots” policy. But, no problem, you can easily solve this problem. You only have to do one thing.

To fix this you will need to either talk to your company’s IT department or delete the account from your device that has the policy.

For that, you need to go to “Settings > Accounts and backup > Accounts”. Then, find the account you want to remove, tap on it, and tap on Remove account. This is undoubtedly going to solve the problem of not taking screenshots.

By making a video of your screen, you won’t be able to watch footage from a secure app all the time. When you go into the app it blanks the screen. Before the screen goes blank, it will give you a look at footage from the app. So run the app in the background and go to the place where you want to take screenshots. Record video and keep pausing it while playing. I hope you get the part of the screenshot you want. Now you can capture it from video.

6. Use Google Assistant Or Siri

If nothing works, you can even use screenshot features provided by Google Assistant or Siri to take a screenshot.

Most devices have features like Google Assistant or Siri to guide us through our device using voice commands. If the above methods don’t work, using these voice commands, users can take screenshots quite easily.

The screenshot-taking feature is great for storing information for later or sending a screen to someone. But, being annoyed by the “Can’t take screenshot due to security policy” message can break one’s anger. Fortunately, there are several ways around this to fix this issue.

I have given our best to get the solution to the error “Can’t take a screenshot due to security policy.” Try out the given ways and solve the error. I hope this article was helpful to you. Stay tuned to us for more and the latest updates.

If you have any doubts regarding this topic, then please let us know about it in the comments section below.